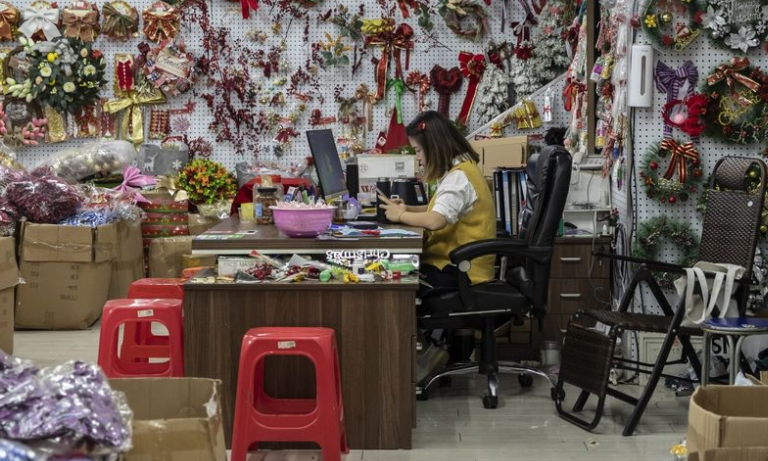 This year, the Chinese city of Yiwu — the world’s biggest hub for the manufacture of plastic reindeer, twinkle lights and other Christmas paraphernalia — is feeling a Grinch-like pinch.

Factories are being hit by a shortage of raw materials that’s raising their production costs, and once goods are on their way shipping snarls are delaying their journey to the store shelves of the West. Since mid-October, Yiwu has also been affected by China’s ongoing electricity crunch, which has forced manufacturers to hunt for generators, or suspend production altogether.

“I’m so stressed I couldn’t sleep,” said Lou Ting, the owner of a Christmas ornament factory, as she worked her storefront in Yiwu’s biggest wholesale mall. “It should be great that we’re getting more orders than last year, but there are so many uncertainties slowing the delivery process — and there’s nothing we can do,” said Lou, who like many in Yiwu is battling manufacturing delays and record freight prices as she works to get candy canes and pine cones shipped to the U.S. and Europe.

Responsible for 80% of the $6.1 billion in Christmas products exported annually from China, the city some 175 miles southwest of Shanghai is a microcosm of the challenges faced by manufacturers and retailers as they end another year plagued by disrupted and distorted supply chains. Home to just over 1 million people, about 45% of what Yiwu makes goes to the U.S. alone.

The majority of orders had already been shipped from Yiwu when power cuts started adding to the travails manufacturers have had to grapple with in 2021, said Cai Qinliang, secretary-general of the Yiwu Christmas Products Industry Association.

But the delays being seen at sea and at ports, as well as the surge in prices for metals and plastic, mean consumers may still have to pay more for their baubles and tinsel this year, according to Chen Jiang, owner of a factory that mainly produces Christmas lights and trees.

Chen has raised his prices by more than 10% since June due to surging materials costs. The electricity cuts, which forced his factory to reduce production to just three days a week in October, just added to his running expenses at the tail end of the high season, he said. The factory had no lights on during a recent visit.

Christmas Crunch
This was supposed to be a rebound holiday for Yiwu’s manufacturers. Business was slashed in half last year, as the pandemic threw the global shipping industry into disarray and major customers canceled orders. Things looked to be picking up in March as retailers who used up back inventories to get through Christmas 2020 rushed to place orders earlier than usual to ensure they were well prepared for the coming season.

Instead, manufacturers’ difficulties were compounded, with soaring commodity prices contributing to the fastest factory-gate inflation in China in 26 years in September.

“Ultimately the costs will be borne by consumers,” said Ding Shuang, chief economist for Greater China and North Asia at Standard Chartered Plc. “Exporters and global brands may only absorb costs temporarily, but companies will not do business if they are making a loss. If more companies exit the market, supply will decline, and prices will increase further as the remaining producers will have greater pricing power.”

China’s Energy Crisis Is Hitting Everything From IPhones to Milk

At Lyu Xiaofeng’s wholesale Christmas tree store, most business has been moved online amid international travel curbs. In previous years, goods spilled onto the sidewalk to catch the attention of visiting buyers from the U.S.

While sales this year are back at pre-Covid levels, Lyu said he wasn’t sure he’d make much profit as the price of steel — used to make faux tree trunks — has almost doubled from last year. Plastic price surges have also significantly raised packaging costs, he said. Lyu expects profit margins, which used to reach 20% at their peak but have declined to less than 10% in recent years, to be even thinner this year.

More than 1 million yuan’s ($157,000) worth of orders that would have normally gone out by mid-October haven’t been shipped yet due to logistics delays, he said. The power cuts mean he’s reliant on a generator that’s running 10 hours a day and he may not be able to get the goods shipped by mid-November, the last real deadline for getting Christmas goods to the West.

“We keep explaining to our clients that we either need to raise prices or have to cancel the orders,” he said, sitting in a store devoid of customers, unable to enter China because of pandemic border restrictions. Instead, Lyu typed away on WeChat, answering inquiries from clients.

“Luckily, most of them are willing to pay more and share the cost burden with us,” he said.