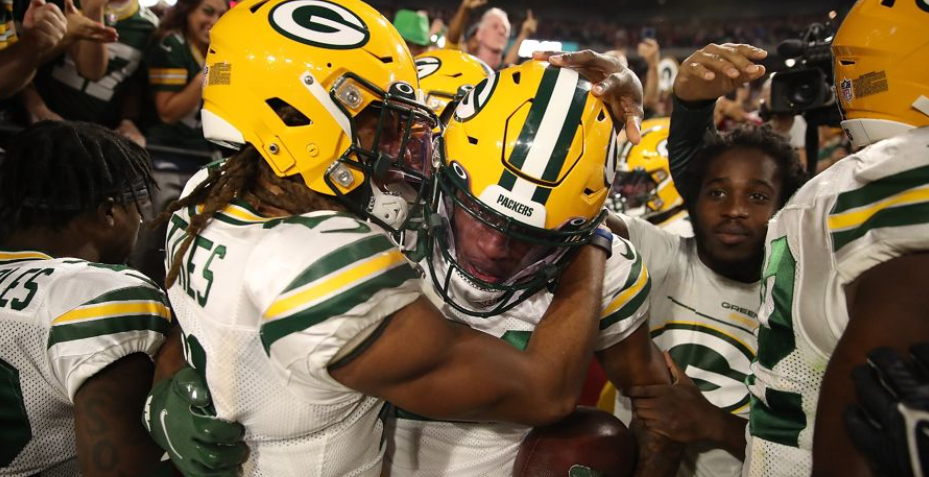 The Packers-Cardinals “Thursday Night Football” game lived up to the hype. Green Bay (7-1) handed Arizona (7-1) its first loss of the season after Rasul Douglas intercepted a Kyler Murray pass in the end zone on Arizona’s last play of the game. The Packers won 24-21.

The last few minutes of the game were a roller-coaster. With 4:46 remaining, Aaron Jones’ rush into the end zone was called a touchdown but then overturned upon review and marked short. The Packers then received a delay of game penalty because they had already used up all their timeouts. Two plays after that, Green Bay turned the ball over on downs at the Arizona 1 after Aaron Rodgers’ pass on fourth-and-goal was knocked down.

NFL POWER RANKINGS: How teams stacked up heading into Week 8

The Cardinals got the ball back with 3:23 left, needing at least a field goal to head into overtime. After long Murray completions to Christian Kirk and A.J. Green, followed by a short gain by Chase Edmonds, they were in field goal territory. Arizona got all the way down to the Green Bay 5, but Murray then threw the end-zone interception, a pass intended for an unsuspecting Green, that ended the game.

MORE: Explaining why Larry Fitzgerald has not returned to NFL in ’21

Rodgers threw for 184 yards while Murray passed for 274. Randall Cobb had two receiving touchdowns for Green Bay while James Conner had two rushing touchdowns for Arizona. Green Bay’s A.J. Dillon was the game’s rushing leader with 78 yards. Arizona’s DeAndre Hopkins, despite being sidelined for some of the game with an injury, was the leading receiver with 66 yards.

Sporting News tracked live scoring updates and highlights from Packers vs. Cardinals on “Thursday Night Football.” Read below for completed updates from the NFL Week 8 game.

Final: Packers 24, Cardinals 21
11:32 p.m. — Rasul Douglas intercepts Murray’s pass in the end zone. It’s his first interception, and the Packers hand the Cardinals their first loss of the year.

Cardinals inside the red zone!

11:22 p.m. — Rodgers’ throw is incomplete on fourth down after Devon Kennard hits the ball in the air. The Cardinals now have the ball inside their own 1-yard line with 3:26 remaining in the game.

What a stop by the @AZCardinals defense! #RedSea

11:20 p.m. — On third down, the Packers are penalized for delay of game. The Packers still have a third-and-goal, but now they are just outside the 5.

Yikes. #Packers get called for a delay of game. Guys just couldn’t get set up.

— Lily Zhao (@LilySZhao) October 29, 2021
11:16 p.m. — Jones rushes into the end zone, but the play is under review for whether the ball crossed the goal line. The touchdown is overturned, and the Packers now have a second-and-goalare on 2nd & goal.

11:14 p.m. — Byron Murphy Jr. gets flagged for unnecessary roughness. The Packers move to the 3-yard line. Marco Wilson is then flagged for defensive pass interference in the end zone, so the Packers end up on the 1-yard line.

Aaron Jones is a baller! 💪🏾

— Russell Wilson (@DangeRussWilson) October 29, 2021
11:11 p.m. — Jones picks up another first down to put the Packers on the Cardinals’ 28. The Packers use their final timeout after the play.

11:01 p.m. — TOUCHDOWN, CARDINALS. Conner rushes in for his second touchdown of the night. The Cardinals score on back-to-back drives. Packers 24, Cardinals 21.

10:53 p.m. — Edmonds remains down on the field after picking up a first down for the Cardinals. He is helped off the field.

Injury updates: #Packers DL Kingsley Keke is out with a concussion. TE Robert Tonyan (knee) is questionable to return. #GBvsAZ

10:38 p.m. — Tonyan finishes a 33-yard gain for the first down, but he remains on the ground after hurting his left knee on his fall. He was able to walk off the field on his own. The Packers are now on the Cardinals’ 21.

Robert Tonyan grabbing his left knee and the trainers come out quickly.

10:30 p.m. — Jonathan Ward (Cardinals) and Kylin Hill (Packers) collide during the punt return. Both players are carted off the field.

10:24 p.m. — TOUCHDOWN, CARDINALS. James Conner rushes in for the Arizona touchdown, which is preceded by a 20-yard reception by Zach Ertz. Packers 17, Cardinals 14.

DeAndre Hopkins on one leg outplaying a corner who runs a 4.25 40

10:20 p.m. — The Cardinals decide to go for it on fourth down for the first time. The attempt is successful after Antoine Wesley catches a 7-yard pass.

10:18 p.m. — Christian Kirk picks up just the Cardinals’ seventh first down of the game. Arizona advances to its 41.

10:12 p.m. — TOUCHDOWN, PACKERS. Cobb catches the ball in the end zone for a Packers touchdown. Jordan Phillips was flagged for roughing the passer; the penalty will be enforced on the kickoff. Packers 17, Cardinals 7.

10:07 p.m. — TURNOVER. Henry Black intercepts for the Packers on the Cardinals’ 14. It is now Packers ball.

Into the arms of @jacckpott for the INT! #GBvsAZ | #GoPackGo

Rodgers went for another Hail Mary in AZ. @AaronRodgers12

9:43 p.m. — Randall Cobb completes his first first down of the night. The Packers are at their 26.

9:40 p.m. — It’s the battle of the defenses right now. The Packers end the Cardinals’ drive.

9:37 p.m. — Hopkins heads to the sideline to get his hamstring worked on. He is questionable to return to the game.

Deandre Hopkins is now officially questionable to return due to his hamstring injury.

9:31 p.m. — The Packers have the ball on the Cardinals’ 3-yard line. Rodgers passes incomplete to Marcedes Lewis in the back of the end zone.

Marcedes Lewis almost had the TD catch of the year. #GoPackGo

— NFL (@NFL) October 29, 2021
9:27 p.m. — It was originally ruled that Rondale Moore didn’t touch the punt and the ball would remain with the Cardinals. The play went under review, however, and the call was overturned. Replay showed the ball did hit Moore’s finger, so it became Packers ball on the recovery of the muff.

Can’t believe this didn’t end up a 1st down pic.twitter.com/ha5uHeTLrn

8:58 p.m. — The Cardinals are called for a neutral zone infraction, giving the Packers 5 yards and a first down.

8:47 p.m. — TOUCHDOWN, CARDINALS. Chase Edmonds scores his first touchdown of the season and puts the Cardinals on top. Cardinals 7, Packers 0.

8:42 p.m. — DeAndre Hopkins nullifies his own 61-yard touchdown reception with a facemask penalty near the goal line. The catch still counts, though. After the 15 yards are marked off for the personal foul, the Cardinals end up on the Packers’ 21.

— Arizona Cardinals (@AZCardinals) October 29, 2021
8:40 p.m. — Sean Harlow is called for offensive holding, turning a Cardinals first down into a first-and-20. There has now been a penalty on first down on every drive.

8:36 p.m. — Aaron Jones drops a long pass from Aaron Rodgers. The Packers end another drive without a first down.

Isaiah Simmons is a linebacker. pic.twitter.com/OXlzjqjZmR

8:27 p.m. — Rashan Gary attempts a tackle but instead is penalized for holding onto Kyler Murray’s facemask. The Cardinals advance 15 yards.

— Pick Six Podcast (@picksixpod) October 29, 2021
8:26 p.m. — The Packers start out the game with no first downs on their first drive. Equanimeous St. Brown was penalized for offensive holding on the first play, moving the Packers’ offense back 10 yards.

How to watch ‘Thursday Night Football’
TV channels: Fox, NFL Network
Live streams: Fox Sports Live, NFL Network, fuboTV
The game will be broadcast on Fox and on NFL Network with Fox Sports announcers Joe Buck and Troy Aikman on the call and Erin Andrews and Kristina Pink on the sidelines.