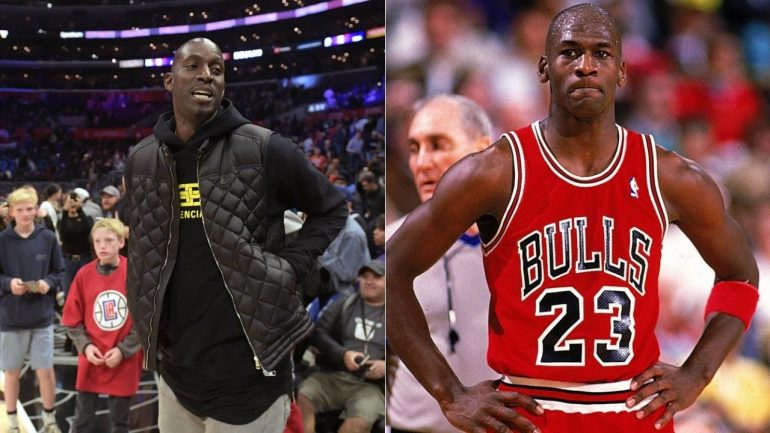 Timberwolves legend Kevin Garnett hilariously recalls a story of how trash-talking NBA icon Michael Jordan as a rookie was a big mistake.

Kevin Garnett is arguably the greatest trash talker to ever play the sport of basketball. However, he met his match in a game during his rookie year. It was none other than the GOAT of trash talking: Michael Jordan.

He realised what every other NBA player already knew: It’s never a good idea to go and challenge Michael Jordan. As a result, The Big Ticket became one of many victims of MJ’s competitive spirit.

What exactly happened between Kevin Garnett and Michael Jordan?

The Minnesota Timberwolves, with a young Kevin Garnett, were all set to face the Chicago Bulls. The Bulls were up by 6 going into the fourth quarter. However, Garnett made the fatal mistake when he told his teammate Isaiah “J.R.” Rider to keep “killing” Jordan in their individual matchup.

Kevin Garnett talks about the incident in question –

“Mike can hear me, but I don’t really give a f, so I double down. As I say that, I feel it. Hands-on hips, legs locked. And then he stares at me for about 15 seconds. There are two ways you can go in this. I can walk this off and pretend I don’t even feel it and dummy out – f that.”

“I see him and Mike having a conversation, saying “He don’t really know, he’s excited.” So now MJ is on the back leg joint, nodding his head saying “Oh yeah?” and I can’t even describe the next six, seven minutes of play. Yo, we’re down 25 now, it was just at two.”

Obviously, it didn’t end well for Kevin Garnett and company. The Bulls dominated in the fourth quarter and won the game 120-99. Michael Jordan ended up with a game-high 35 points. In addition, he also put up six rebounds, seven assists, and two steals.

Garnett was so remorseful that he apologized to Jordan during All-Star weekend a few weeks later. Luckily, Garnett got over the incident with stride and had a great career in the NBA.

If anything, he learned from this incident and became one of the best trash-talkers ever to play the sport of basketball.