Meet Daniel Del Core, a Gucci Alum Whose Runway Debut Is the Talk of Milan 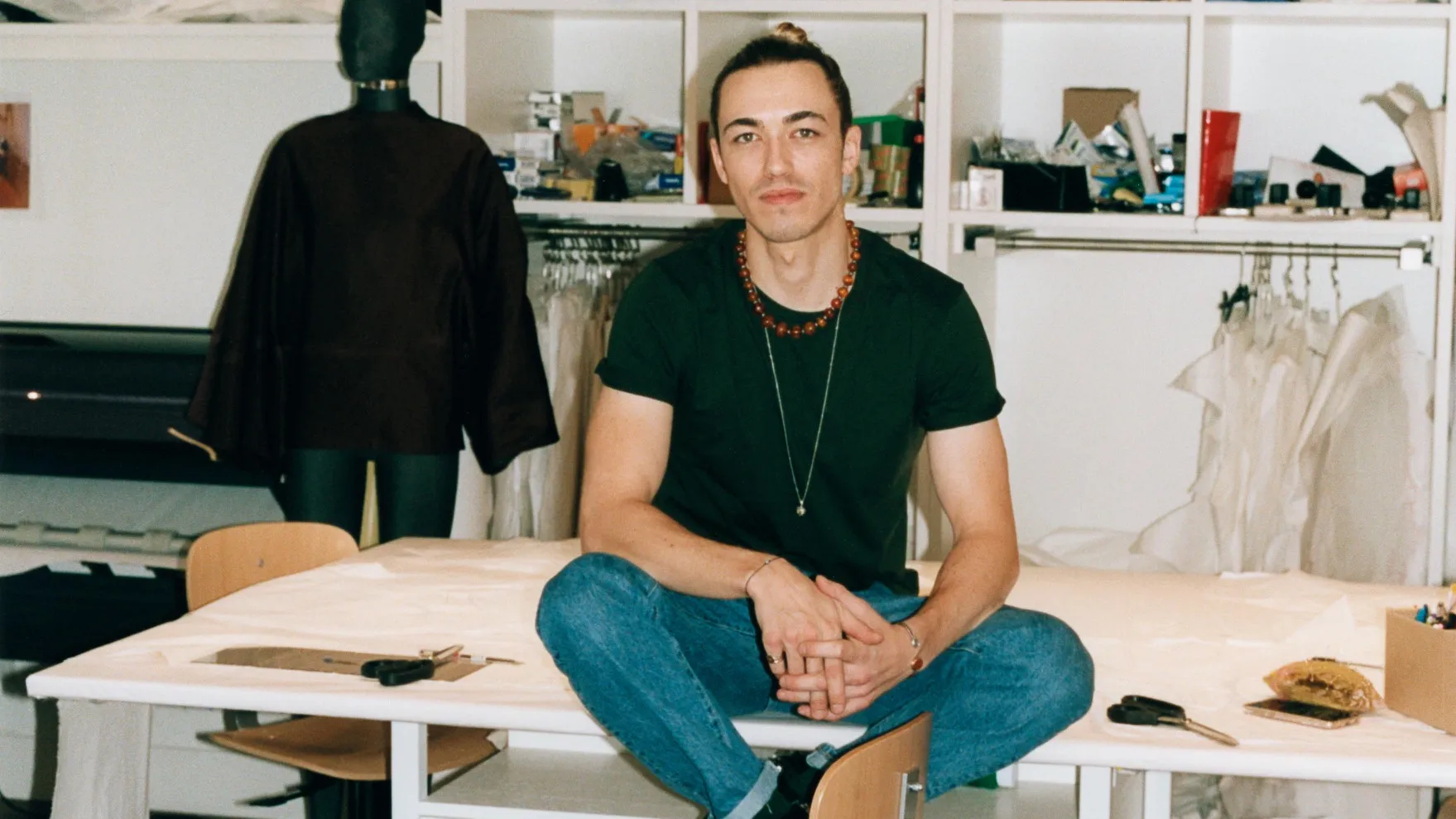 Not all debuts are created equal, but the launch of Daniel Del Core’s new label was impressive. Even more remarkable was the fact that, in these difficult times, a young designer like him has been given the opportunity to build his own house from scratch.

Del Core’s was the only show staged physically during this digitally driven Milan season, attended by a small, COVID-tested audience. The location was unprecedented: Cittadella degli Archivi is a compound of anonymous administrative buildings where the municipality of Milan’s archives are stored in the middle of a remote, run-down area never before used for public purposes. It made for a stark contrast with the collection’s theatrics; these were outlandish, couture-inflected creations, inspired by sci-fi, mutant glamour, fungi, mold, and bioluminescence.

Image may contain Building and Bridge  Gucci
For his debut collection, Del Core created an intimate, luminescent runway. Photographed by Tiziana Cardini.
The 31 year-old, German-born, Milan-based Del Core honed his considerable sartorial chops at Gucci, where, under Alessandro Michele’s tutelage, he was in charge of the VIP department. Björk is one of the many stars he has dressed, which explains why the biomorphic masks covering the model’s faces made you immediately think of her—or of some of Alexander McQueen’s most savagely beautiful designs. More precisely, they recalled the spectacular 3D Vespers death masks created through generative algorithm-based design by scientist Neri Oxman and her Mediated Matter Group at MIT. That’s not the usual association one makes while looking at models strutting on a catwalk.

Before the show, the largesse of Del Core’s investor was on obvious display at the label’s lavish headquarters, a three-story building tucked away on a quietly elegant street in the city center. Legend has it that it was a brothel in times past. Now it has been converted into a sort of cool beehive which houses the company’s whole operation, including the atelier where a young creative team of 30 concocts and crafts the label’s imaginative custom-made creations. Del Core’s own sprawling studio and flat are on the top floor. That’s where I sat down with him to talk about the charm of mushrooms, the sex-appeal of tree bark molds, and waking up in a tent in the Amazon, thinking about how to design the best dress for the next performance of Florence and the Machine.

﻿Tell me about your background.

My mother is German and my father is German-Italian: my paternal grandparents hailed from Puglia in the South of Italy. I left Germany at 16 to study art, ceramics and sculpture in Italy. Then I upgraded my studies to design, visual arts and fashion at Milan’s IED. I started a long string of internships, first at Dolce & Gabbana, then at Versace. After that I worked with Zuhair Murad in Paris and Beirut before decamping to Rome to work with Alessandro Michele. I was responsible for the VIP atelier—a great experience for which I’m truly grateful to Alessandro, he’s a fantastic mentor. Working with the likes of Björk, Lana Del Rey, Beth Ditto, Dakota Fanning, and Florence Welch taught me a great deal not only about spectacular red carpet dressing, but also about how fame and celebrity can be handled. Handling the constant scrutiny that comes with it isn’t an easy feat. I think they’re very courageous women; for performers and artists, dresses are like carapaces that protect them and give them a self-confident persona. The right dress can make a woman resplendent with strength. That was my job—a privilege, really.

How did you decide to start your own brand?

Every young designer dreams of flying solo. For me, it happened almost by chance, an alignment of lucky coincidences. To create something totally new from scratch was exhilarating, although the pandemic got in the way. Working remotely with a new team hasn’t made things easy.

What feeds your creativity? You have a background in ceramics and sculpture, which seems to have a visible influence on your aesthetics.

I obviously have a theatrical sensibility, so Galliano and McQueen have always been my galaxy’s North Stars. But more than the work of other designers I’m inspired by the handwork of the humble but extremely skilled artisans I’m working with, as craft is of pivotal importance in what I create. Elevated construction is what my pieces are all about. And painstaking attention to detail—it’s about achieving couture levels. We do everything by hand in our atelier. I think of Adrian, the Hollywood costume designer, or Roberto Capucci in Rome, their supreme ability to combine vision and craft in their sculptural, spectacular pieces. But for me there must also be a spontaneous, emotional feel.

An idea of nature as a morphing entity, of mutations between the organic and the artificial, seems to be a subtext in your work. Can you expand on that?

I don’t do research in vintage stores. My research is my holidays in remote places, with just a backpack and a tent to camp in the jungle. Last time I was able to travel I went on a survival-mode trip in the Amazon with a shaman. It was a dream. That’s where I get my inspiration from. You just wake up in the middle of the night and you see the most incredible luminescence; little creatures glowing in the dark. Or birds doing mesmerizing mating dances. It’s the most sublime thing. Then a dress takes shape in your imagination as if by magic. I love the idea of the energy that comes from a hidden world in constant evolution, motion and mutation. In the collection we’ve translated molds into precious handmade sequined rosettes; we’ve made fungi growing on tree barks into pleated-organza fans on bustier dresses. The moss you find as a carpet in forests has become a silicone molding enveloping high-heeled sandals. The undulated crystal-studded sleeves on a strapless dress came from the iridescence of a beetle’s carapace. Bacteria, exotic flora, alien organic formations; the idea of mutation and evolution is just beautiful. Nature has all the answers—there’s no need to look much further.