Gucci sisters selling their dad’s spectacular $45m Fifth Avenue apartment, 20 years after he was killed in hit ordered by his wife 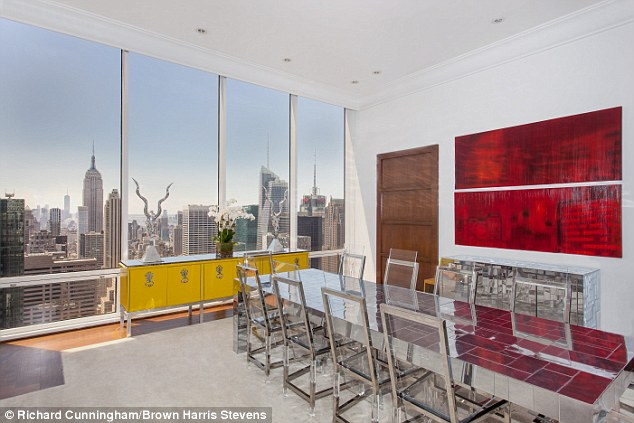 Two sisters who are known for high fashion are charging a high price for their eight-bedroom, nine-and-a-half-bathroom penthouse on Fifth Avenue in Manhattan.

Alessandra and Allegra Gucci have listed their 9,500-square-foot duplex at the Olympic Tower for $45million with agent Daniela Rivoir of Brown Harris Stevens.

Their late father Maurizio Gucci. bought the apartment, which is on the 50th and 51st floors of the tower, in the 1970s and his daughters have been renting it out since 2010.

Alessandra and Allegra Gucci have listed this 9,500-square-foot duplex at the Olympic Tower for $45milluse sold for a…

Pavarotti couldn’t get enough of it, Joan Collins…

Inside the £200k cruise that nearly sold out IN A DAY:…
SHARE THIS ARTICLE
Share
624 shares
The current tenant at the luxury condo pays $60,000 per month, the Wall Street Journal reported.

The sisters are selling the ‘loft-like’ duplex because ‘we’ve grown up, our needs have changed and we spend most of our time in Europe’, they said in a statement.

The home, which was originally two units, has two kitchens, elevators and wood-burning fireplaces.

It offers ‘a perfect panoramic New York perspective’ and has views of the Statue of Liberty, One World Trade Center and New York Harbor, according to the listing.

One of the apartment’s showers, which offers amazing views

The top floor has a ‘wood-paneled library with a limestone inset’, 28 full-length windows and a 14-foot ceiling.

There is also a ‘large dressing room, whirlpool bath tub and separate shower’.

Taxes and maintenance on the apartment total $24,500 per month.

Corporate entities are ‘welcome’ to purchase the property, the listing agent said.

In 1998, Alessandra and Allegra’s mother, Patrizia Reggiani, was found guilty of ordering a hitman to shoot dead 46-year-old Mr Gucci in 1995 following their acrimonious divorce.

She was turned in by her clairvoyant and confidante Pina Auriemma, who told police about the plot.

The trial – where it emerged that the defendant was still furious after she discovered her husband had dumped her for a younger woman in 1985 – captivated not only Italians but the world.

Ms Gucci, who arrived in court in designer outfits every day, told the judge and jury of how she had been betrayed by Ms Auriemma, saying: ‘Never let even a friendly wolf into the chicken coop.

‘Sooner or later it will get hungry.’

Patricizia, now 66, was released on parole two years ago after spending 15 years in jail. It is believed she kept in touch with her daughters during her incarceration.

Patrizia in May this year, when she released her autobiography. Right: Her former husband Maurizio in the early 1990s, before he was shot dead by Patrizia’s hitman

She had been eligible for parole in 2011 but told the board then: ‘No thanks, as it would mean getting a job, and I have never worked a day in my life.’

The Guccis are one of Italy’s richest and most well-known ‘dynasty families’, and their saga has been turned into a TV series.

Mr Gucci was the grandson of Guccio Gucci, founder of the fashion company made famous with its double G logo.

In the early 1990s the label was hit by problems and Maurizio sold it for $120million to a Middle Eastern investment group.

His ex-wife’s trial heard how she ordered the murder after Gucci offered her $650,000 in a divorce settlement.

She rejected it, describing it as a ‘plate of lentils’ and insisting she wanted at least $1million. She is now known in Italy as the ‘Black Widow’.