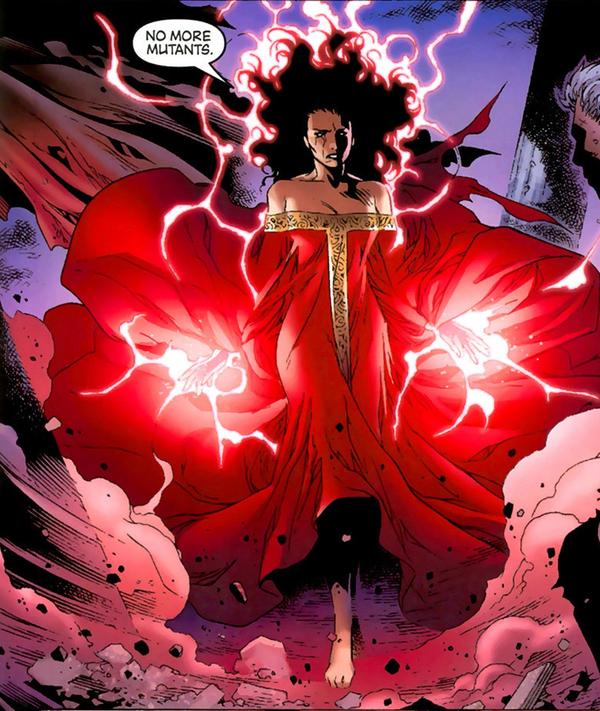 Chaos Magic Marvel is a type of the most powerful magic that even the current Sorcerer Supreme assumed didn’t exist. This power has the ability to modify, bend, and recreate the fabric of existence and reality to suit the user’s every desire, as well as completely destroy the universe.
Currently, Chaos Magic has been brought to the screen of Marvel Cinematic Univer through the WandaVision Series and most recently Doctor Strange in the Multiverse of Madness. So let’s compare this magic in both comics and movies.

Chaos Magic Marvel originated billions of years ago in the Marvel Comics world, while the Earth was still in the process of creating. At the time, an ancient species of powerful creatures known as the Elder Gods roamed the globe freely.

Chthon, one of the most powerful gods who subsequently became a horrible villain, was the first one on Earth to harness the power of enigmatic dark magic. As the God of Chaos, he so dominates the blue planet and produces reality according to his will. However, Chthon, like other great stories, was exiled and locked into another dimension via a portal near the Wundagore node in Eastern Europe.
Wanda Maximoff was born in the vicinity of this mountain range. And it is for this reason that she received Chthon’s magical power. Chthon is also planning to utilize Wanda as a possible item to parasitize and return to in the future. As a result, as Wanda matures, her innate strength within her body rises. Her magical nature eventually evolves, making her one of the most powerful characters in the Marvel world.

The power of Chaos Magic Marvel allows the user to change reality at will. As for Wanda, her use of Chaos Magic is rather erratic and out of control. When enhanced with Life Force, Wanda was even able to create Chaos Waves that spread throughout the multiverse, upsetting the multiple realities of these multiverses and creating the House of M event.

Originally, Wanda’s Chaos Magic was simply the ability to impose one’s will on the probability of events occurring. That is, Wanda has the ability to make something more likely, and this ability was initially called Hex.

Wanda was later trained by Agatha Harkness to develop her magical potential and her magic was greatly enhanced.

She only had the power to change reality when Immortus filled her body with a huge source of Nexus Energy and as a result, Wanda was able to create life using magic – her twin children and Vision.
Wanda’s power really peaked in events like Avengers Disassembled, House of M, and The Children’s Crusade. Especially during the event of House of M, Scarlet Witch used her magic to change the reality on the scale of the entire universe. She created a new reality where mutants under Magento’s leadership defeated humanity, avenging the injustices they had suffered and became the superior race that ruled the entire planet.

When the case was exposed and the superheroes pushed them to the bottom, they wanted to restore reality to the way it was. Wanda – Scarlet Witch used Chaos Magic Marvel by saying the legendary 3 words “No More Mutants”. With just these 3 words, Wanda caused 1 million Mutants to lose their power, pushing this race to the brink of extinction. Even destroying all possible futures makes no Mutants born in future timelines.

Chaos Magic is the counterpart to the Phoenix Force. In House of M, the Chaos Wave spread across the multiverse and affected the Phoenix Force, causing Phoenix to come to Earth to restore balance. This is also the reason behind the birth of Hope Summers, creating a timeline where the Mutants species have gradually escaped extinction.

Wanda Maximoff first appeared in Avengers: Age Of Ultron. Through events like Captain America: Civil War, Avengers: Infinity War, and Avengers: Endgame, we have witnessed how terrible Wanda’s power is.

But Chaos Magic Marvel is only really mentioned in the WandaVision Series. After revealing the first major villain, the witch Agatha Harkness in episode 7, WandaVision continues to deliver extreme steering in the latest episode when bringing the audience back to Wanda Maximoff’s traumatic past. This is also the first time the source of this character’s power has been thoroughly explained, giving her the nickname Scarlet Witch and completely changing a huge piece of content that the MCU has worked hard to build over the years.

A little summary of episode 8 of WandaVision: After “playing back” with Wanda, Agatha forces her to confront the traumatic events of her past in order to find out how Wanda created The Hex around the Westview area. . Next, we are returned to Sokovia, when the Maximoff brothers were only 10 years old but had to witness the death of their parents after a sudden bombing. The story continues with the fact that Wanda volunteered to participate in HYDRA’s Mind Stone experiment; Pietro’s death; and finally the departure of Vision after Infinity War. All of these were memories that Wanda was trying to hide.

And in the scene where Wanda comes into contact with the Mind Stone, Marvel Studios has brought the biggest twist: It turns out that this infinity stone does not bring the power to the witch as fans mistakenly believe. It only helps to unlock and stimulate the abundant innate energy in her body. In the post-credits scene of Wanda Vision we see Wanda sitting and chanting and next to it is the Darkhold book.

Next in the latest movie – Doctor Strange in the Multiverse of Madness, we got a clearer look at Chaos Magic and the origin of Chaos Magic Marvel. This magic comes from Elder God: Chthon, who is currently sealed in Mount Wundagore.

Before the definition of Chaos Magic Marvel was mentioned, Wanda had only a few magical powers such as Telepathy, Telekinesis, and gravity control.

Telepathy, or telepathy, is the ability to infiltrate and manipulate the minds of subjects without their permission. Wanda can make them fall asleep, read minds, communicate, and even create illusions inside their heads. Of course, she needed to have enough distance to do it.

Telekinesis is the ability to move and control objects from afar, regardless of their physical form. While this isn’t an outstanding ability, Wanda has used this power frequently throughout his journey in the MCU, and in fact…it’s very powerful. Her telekinesis was quite different because it had reached a great degree of perfection thanks to the enhancement of magic. Besides, she can also control gravity.

In WandaVision, Wanda’s power can also create The Hex around the Westview area and manipulate it so that everything in The Hex will work according to her will.

The latest is in Doctor Strange in the Multiverse of Madness, we can see the ability of Wanda – Scarlet Witch with the Darkhold book on a whole different level. She was able to defeat all the monks at Kamar-Taj, even Doctor Strange and Wong – the Sorcerer Supreme could not stop her.

Scarlet Witch is able to control monsters in other multiverses to pursue America Chavez in order to gain her powers as Wanda believes that controlling the multiverse with Chavez’s powers will allow her to reunite. with Billy and Tommy, children she created with magic during her time in Westview.

The most prominent power that the Darkhold book brings in the movie is the ability to “sleepwalking”. “Sleepwalking” allows the user to take control of another version of themselves in another universe while keeping the user’s powers intact. With this ability, while chasing Chavez on Earth-838, Wanda was able to brutally murder the entire Illuminati group including Mordo, Captain Peggy Carter, King Blackagar Boltagon, and Captain Maria Rambeau (Captain Marvel), Dr. Reed Richards, and Professor Charles Xavier.

But in my opinion, the power of Chaos Magic Marvel in the MCU is not as clear as in Comics. The new powers associated with Wanda’s Chaos Magic really only come from the Darkhold book. When the book was destroyed, Wanda could no longer “sleepwalking” but had to go to Mount Wundagore, a forbidden ancient ruin where the Darkhold was born, so that he could continue to use “sleepwalking”.

>>> READ MORE: GOTHAM VILLAINS: WHY EVERYONE LOVE THE PENGUIN?

3 thoughts on “Chaos Magic Marvel: Comparision Between Comics and MCU”