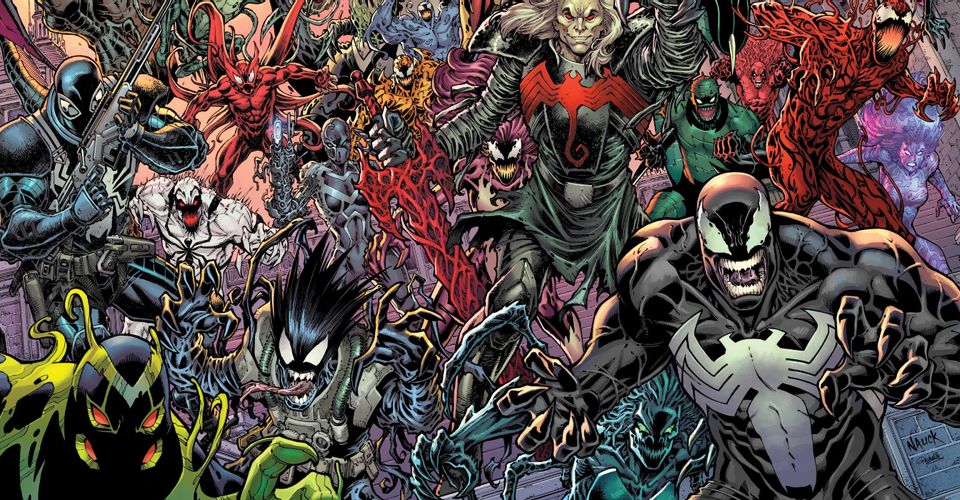 All Symbiotes Marvel originally appeared in 1984, when Spider-Man donned a black outfit that boosted his abilities. Until 1988, Venom was created by writer David Michelinie and artist Todd McFarlane, demonstrating that symbiosis was one of Marvel’s biggest threats.

Since then, there have been many special symbiotes created on the pages of Marvel. Recently, we have learned that the symbiotes were created by Knull – a god with ambitions to conquer the universe and resist the light created by the Celestials. Therefore, the symbiotes are incredibly powerful. Let’s learn together about the 5 most of all powerful symbiotes, ranked.

When Eddie Brock and Venom were beaten and temporally separated, Symbiotes Marvel: Carnage was born. Eddie is being held at the same facility as serial murderer Cletus Kasady. When Venom returned to Eddie, it reproduced and generated a new symbiote, which merged with Cletus Kasady to form Carnage, Venom’s most lethal offspring.

Because the offspring of a symbiote is stronger than their ancestors, plus Cletus is a bloodthirsty serial killer, the once ferocious Carnage is now much more ferocious and dangerous. time.

Carnage has all the power of Venom but is faster and more powerful. It can also create weapons from its limbs. In “Amazing Spider-Man” #362 and 363, stopping Carnage requires the cooperation of both Venom and Spider-man. Since then, Carnage has returned regularly, and it took all of the heroes to stop him.

After Cletus Kasady and Carnage were defeated and separated. Scientist Michael Hall isolated these two entities. Hall wished to be able to extract pieces of Carnage and integrate them into prosthetics that would allow them to control their prosthetic limbs like real limbs.

But in the end, Carnage escaped and took the body of Dr. Tanis Nieves to free Kasady. He and Kasady are finally reunited, and Carnage immediately leaves Tanis. But Carnage left one of her clones in Tanis’ prosthetic arm, turning her into a Scorn.

Symbiotes Marvel: Scorn can use his symbiote to control technology and integrate a variety of weapons into his body to create high-tech killing devices. Although Tanis is initially rejected Scorn, after seeing what the symbiote could do, Tanis formed a good bond with Scorn and helped Iron Man and Spider-Man defeat Carnage.

After Eddie discovered his cancer in “Spectacular Spider-Man” #4 (2003) and was cured of his cancer by Mister Negative in “Amazing Spider-Man” #569, antibodies specifically developed by Brock dissolved any remnants of Venom and spawned a new type of symbiote – Anti Venom.

This reverses the original Venom’s black and white colors. Anti Venom’s powers are also less destructive but can instead heal the host from the effects of radiation and disease. Weaknesses of symbiotes such as fire and sound no longer affect Anti Venom.

Known as the child of Carnage, as well as the 1000th child of the Symbiotes Marvel. Both Venom and Carnage knew that this child would be stronger symbiote than the two combined.

Out of fear, Carnage tried to kill his son, but Venom wanted to raise him and named him “Toxin”. But in the end, Toxin befriended Patrick Mulligan – a police officer in New York City.

Toxin’s power is so great that even Knull – King in Black must be scared. If each born symbiote has the memory of the previous symbiotes, but with Toxin – the 1000th child, this memory is faulty, so Toxin now is no different from a child. In addition to being trained by Patrick to become a hero, Toxin’s true strength has been greatly reduced.

Toxins can withstand high temperatures and sound better than other symbiotes. It also has the ability to track anyone, and Toxin’s bite is extremely venomous.

In fact, Knull is not a symbiote, he is the creator of All Symbiotes Marvel. Knull was born from the primordial void. After the Celestials brought light into the realm of darkness, Knull created the All-Black sword. This sword combines with the host in the same way symbiotes do.

While waging war with the Celestials, Knull caused fear in the entire universe. But after All-Black was lost, Knull created an army of symbiotes, connecting with him through his mind to conquer the universe while he sat on his throne.

Besides the power of a god, Knull – King in Black can manipulate the abyss that existed before creation, bringing life out of the darkness. Can control symbiotes, immortal, and can control time. Those things make Knull one of the biggest threats in the entire Marvel universe.

2 thoughts on “All Symbiotes Marvel: Top 5 Powerful Symbiotes in Comics”